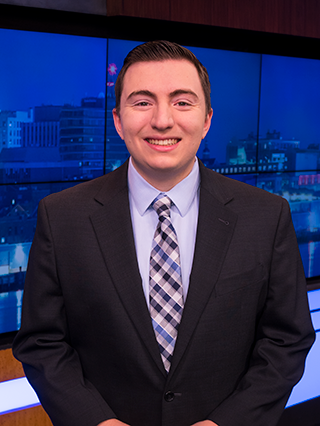 Matt joined the WGME/WPFO weather team in July 2020. Born and raised just outside of Boston, Matt had an interest in meteorology as early as pre-school. Classic New England nor’easters and severe weather fueled his interest growing up.

Matt took his interest to Penn State University, where he earned his bachelor’s degree in meteorology and atmospheric science. During his time at Penn State, he appeared on numerous TV broadcasts, including “The Centre County Report” and “Weather World”. He served as the president of the Penn State Campus Weather Service in 2019, the nation’s oldest and largest student-run weather forecasting organization. He then was a weather intern at WCVB in Boston, where he covered the Cape Cod tornadoes of July 2019.

Matt is excited to return to New England and continue forecasting the weather he loves. When Matt isn’t tracking the next big storm, he enjoys playing tennis, hiking in the White Mountains, exploring local breweries, and watching the Red Sox and Patriots.

You can watch Matt weekdays on CBS 13 News at Noon.