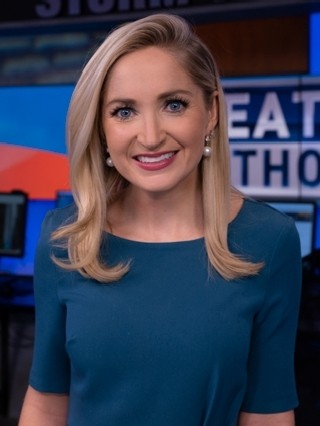 Lexie O'Connor is thrilled to forecast Maine’s storms and weather every weekday morning as Good Day Maine’s morning Meteorologist and on CBS13 at noon. She has been a part of the CBS13 News and Weather team for the past 7 years, first as a Multimedia Journalist and Reporter before joining the weather team. She is now a two time Emmy nominated Meteorologist.

Lexie has reported on several big stories in Maine as one of the first reporters on scene when Somerset County Sheriff’s Corporal Eugene Cole was shot and killed and the manhunt that followed to when five tornados came through the Lakes Region in the summer of 2017. She now brings her experience as a reporter and covering dozens of blizzards and storms to the green screen.

Lexie is originally from Massachusetts and loves now calling Maine home. Prior to Portland, Lexie worked as a General Assignment Reporter and fill in anchor and producer at WKTV in Utica, N.Y. There she covered the fatal shooting spree that killed four and ended in a standoff in Herkimer, New York, the merging of two school districts and the outbreak of Central New York's bath salts epidemic. She's also credited for giving the first reports for Central New York live from Boston following the Marathon Bombings.

Lexie has found a new love for coffee with an even earlier alarm now and enjoys spending time with family and friends. She loves Maine and all it offers from the mountains to the beachbut especially the beach! She lives in Portland with her husband and you can sometimes catch them going on a run through town, skiing, or trying out a new restaurant in the Old Port.

You can catch Lexie on Good Day Maine Monday through Friday from 4:30 am to 9 am and at noon on CBS13. Make sure to reach out to her and say hi if you ever see her out about!